Posted on 2 October 2019 Categories: Najaarsreis 2019, Reizen No comments yet 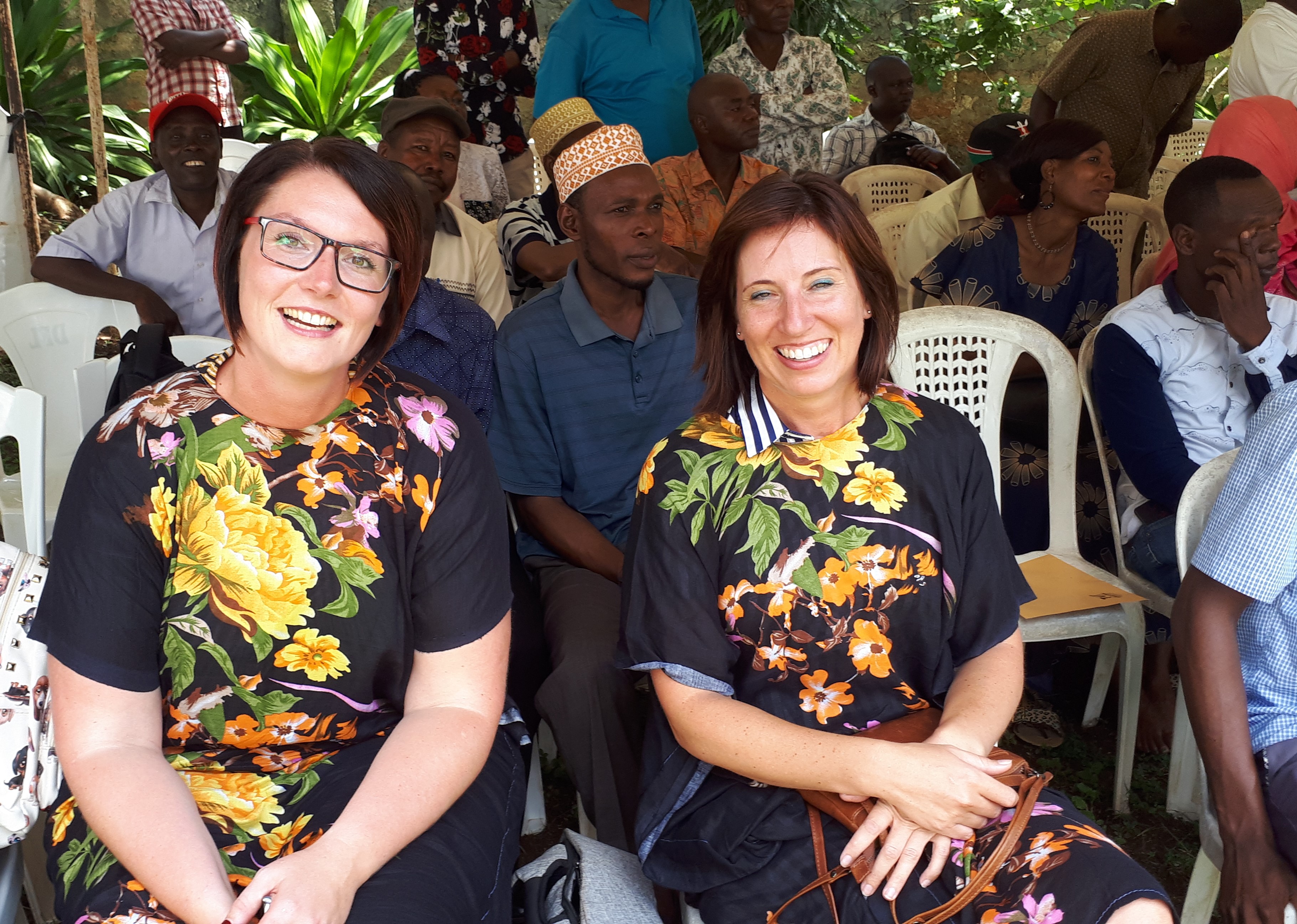 They become more and more colorful during the final celebration, where the mutual friendships between Kenyan and Dutch education people are rightly celebrated. As a thank you, the Kenyan colleagues decorate the Dutch with beautiful dresses and cloths during singing and dancing. That the deputy governor of Kwale is also there, soon becomes clear from its extensive effect. The area of the notables is more than filled. Of course there are speeches from our chairman Jan van Aert and the deputy of the Teachers Service Commission (TSC), the employer who, after repeated insistence by Francis Nzai, finally gave permission to visit schools during this important third term. Francis surprises the massively attended public with the announcement that he will be setting up a local fundraising team together with the KCDF (Kenyan Community Development Foundation), because Teachers4teachers is now relying too much on Dutch contributions. To keep things going, he immediately presents only five of the seven members of his team. The timing seems good, because in her speech deputy Governor Fatuma Achani indicates that the team can count on a contribution from the County. Fatuma emphasizes once again the importance of education as the basis of all development and the role that T4T has played in it since 2003.

Traditionally the celebration is concluded with the performance of the Tarumbeta group, but first by our own unsurpassed team with the T4T song Education is Future. It looks just as strange when the group turns its face to the notables, so that the majority of the public only sees backs of performers. But that’s the way etiquettes are in Kenya. As expected, this team quickly finds a solution for this uncomfortable situation. At the chorus people quickly turn around, so that everyone is served.

The fact that local fundraising is becoming increasingly urgent for T4T is partly due to the developments within the projects, which are also growing in number. In our Strategic Policy Plan we strive for Kenyans to become more and more responsible for the projects themselves. And because T4T does not give money or goods, but comes with the support of the boards themselves, there will be less and less financial contribution from the Netherlands during the transfer of programs. A sketch of the state of affairs:

Early Child Development
Nowadays the Dutch give the workshops to teachers and head teachers and the meetings of Ward Officers are also conducted by T4T, in this case whit designing an observation instrument for Young Children and with effective communication. From next year, Kenyan facilitators will also be trained to give workshops, provided that experienced Dutch people come along.

Special Needs Education (SNE)
This project is still young and requires a lot of attention from T4T for the time being. The differences between schools are huge. Sometimes there is hardly any education, among other things because there is a lack of knowledge of disabilities, and sometimes a special needs child is tried to develop. This year’s theme is ‘Awareness of disabilities and possibilities’ Primarary Education
This project has been running for some time and this year three experienced Dutch people started with a train-the-trainers approach. They only work together with a potentially suitable Kenyan colleague to give the workshops while training him/her to become a trainer too. Exciting? Yes. Successful? The results are positive, but there are still steps to take. It is only the beginning. The theme for this group is’ Coaching approach and educational leadership.

School Leaders Course
We are already very far in transferring this course to Kenyan people. We started in 2007 with eight Dutch coaches and four trainers, now there are only Kenyan coaches and the course is also fully led by Kenyan trainers. T4T only monitors.

Coaching Course
This training provides the coaches for the school leader training and this year Mishi Dohla is trainee coaching for the first time. That means learning by doing and it has to be said, she takes her role well and takes a lot of initiative. The insertion of relevant theories into the practice reflections obviously requires attention, but there are still two years to go. The advantage of this development is the continuity during the months that T4T is not there.

Secondary Education
Secondary education in Kwale does not have a good reputation nationally. See also:Secondary education development. Moreover, it was for a long time pioneering for T4T to find the right contacts. The project is now gaining an increasingly solid foundation, partly because the team leaders (Heads of Department in charge with academics) understand the importance of an ongoing program. This year, communication was chosen in consultation. The Dutch team leaders work together with their Kenyan colleagues on this theme. Interest in the workshops is increasing considerably. So T4T greatly benefits from more VO boards to participate in this interesting (also for the Dutch!) Project.

Curriculum Support officers
The inspectors are an important link between teachers and the TSC. They themselves indicate that the improved educational performance is partly due to T4T. In addition to the workshops, they also mention their changing role, so that there is more commitment from the head teachers to actually develop the schools. The switch from control to support (the change from Zone Officer to Support Officer was only made a few years ago) is taking shape. Here, T4T contributed to an effective instrument for school visits (KRIPT) and the coaching approach. The instrument has since been replaced by a national assessment instrument, but the coaching approach remains. There is a high degree of equivalence in these workshops. This year, for example, through a brainstorm about reducing their workload without losing quality.

And so a particularly motivated group with a head full of impressions returns to their autumn-like homeland to try to explain attentively, but hardly understanding, family members ‘how it was’.